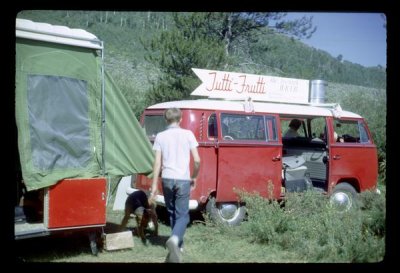 It has been a busy January. An impromptu trip to New York with unexpected political benefit, a nearly complete overhaul of the website, half-a-dozen speeches before groups and Rotaries, along with my recruitment by the Rotary HOC to do the website and business center for the 2007 Salt Lake Rotary International Convention. It has left little time for ruminations on my blog, but something happened today that warranted some notice.

Since my announcement, my father has been my biggest fan. He has confessed that he stays awake at night trying to come up with campaigning methods. He has served as driver in parades and mechanic in getting the ancient family motorhome functional for touring. Out of anyone involved, he has been the most consistent volunteer. I am lucky to be his son.

When my parents were starting out the family business, they exploited advertising wherever they could find it. The picture on this page is of their VW Bus with a handpainted sign across the top for the “Tutti Fruiti” juicer that was their product. It wasn’t long into the campaign that Dad got out the plywood and made an “Ashdown for Senate” sign that he proudly hung on his Ford pickup he drives around Bountiful, Utah. One of the most conservative cities in the state. The city I was born and raised in. The city I love.

Tonight I received an email from him.

Hi Peter,
I have run into either the opposition or just vandalism. I had the sign I made for your campaign on the top of my truck. I went to the grocery store and while doing the shopping someone broke the sign off. It was gone when I came out.

My father had his plywood sign vandalized and stolen. My 80-year-old father, who was born in Bountiful when it had less than 2,500 residents. My father, who lived in a chicken coop when Grandma accidentally burned down their house. My father, who survived the Great Depression. My father, who volunteered for dangerous submarine duty in WWII and was placed by fate on a supply ship instead. My father deserves more respect than this.

When I started this race, someone called for a boycott of my business XMission and it didn’t bother me. A few months later, someone threw a brick through a $1,300 15 foot window at the campaign office and I wrote it off as kids. This, however, this bothers me. I must be underestimating my incredible political threat for people to be so low in response.

I’ve heard all sorts of tales of political hatchet jobs from the local to the national. Some people have told me that I need to repeat these tales as fact connected to my opponent, but I refuse to. However, the beauty of what happens to me directly is that I have an avenue to turn around and report it. So keep it up chaps, I’ve got this shiny new technology that levels the playing field and presents you for what you are. Neither red nor blue, patriot or partisan, but a yellow coward who vandalizes the work of an 80-year-old American veteran.

My father closed his email with the following.

Maybe it should be made of steel.
Love, Dad

16 thoughts on “By Their Works”