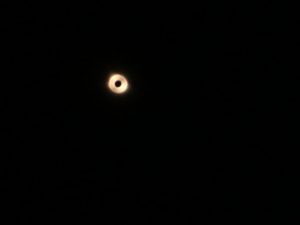 I remember her waking me up while I was in my sleeping bag. My mother sat on the edge of my motorhome bunk and looked out the window with a cup of tea in her hand. She told me the lunar eclipse had started. I peered out and saw a blurry red shadow move over the face of the moon. In her company, she showed me the rocks that came back from the first mission to the moon, Comet Kohoutek, Halley’s Comet, and many partial, but never full eclipses. My mother opened the sky to me.

I had known about the total eclipse of 2017 for what seemed like all of my life. On that date, I knew I would be there to see it, no matter the cost or the struggle. I was hesitant to make any reservations prior to the week before August 21st, because I didn’t want to be sitting under a sky of clouds while it happened. Last Thursday, I was made aware of a rancher who had cut up his fields into lots for cars, tents, and recreational vehicles. His property included an extinct volcano that provided excellent views of not only the sky but the horizon. I wanted see as much as I could when it happened. The location in Menan, Idaho had a forecast of 1% chance of cloudiness in the days before the eclipse. I secured my reservation on Thursday the 17th.

The 1973 Superior Motorhome that I used and painted for my 2006 campaign had reverted back to its sky blue color and was mostly functional. I had taken it on trips to Moab and Zion National Park and aside from a broken water heater, which had since been repaired, it fared well. Although the drive from Salt Lake City to Menan was only 3.5 hours, I planned to leave 24 hours in advance to make certain nothing was left to chance. Frankly, my biggest fear was congested traffic. My fears were misdirected. Outside of Brigham City, the mothorhome transmission started to slip. I pulled over to the side of the road and my sister and I went across the freeway and loaded up on transmission fluid. As I was walking back, I noticed the drip and splash of fluid on the road leading up to the back of the vehicle. It was as if the beast had been harpooned in its underbelly. Nevertheless, I filled the transmission with fluid and an additive that supposedly stops leaks and it shuddered back into service. Ten miles later, it gave up again.

I stayed with the motorhome until the tow truck arrived, while the other adults went back to Salt Lake City to fetch cars to make the journey. Six hours later, we were all back on the road to Idaho again.

The next morning, I packed up the tent in anticipation of a quick evacuation. As soon as the the moon started to move over the sun, we all started the hike up the side of the volcano. At the top, we found a secluded edge overlooking the valley with a prominent view of the sun. Then over the course of an hour we counted down and took pictures.

In the final ten minutes, the northern part of the valley had an ominous darkness that was closing in on us. The temperature dropped, and the birds stopped flying. From the top of the volcano, we couldn’t hear any insect or animal activity. The sun went from a crescent to a sliver to an edge. In the final ten seconds, the crowd of about a thousand people started to count down. We looked through our solar glasses for the Bailey’s beads and watched the sun disappear into darkness. With the glasses on, it was as if we were blindfolded.

As I lifted the glasses to view the total eclipse I gasped. The tears streamed down my face and I grabbed my gaping mouth. Never had I witnessed such beauty. The sky was an alien blue grey, and the horizon was illuminated with a sunset-like glow in all directions. I saw no stars, and Venus was the only planet that peeked out of the firmament. I was transported and transformed. Like I was staring into the sun’s soul and it was staring back at mine. All the complications, heartbreak, struggles, and complaints of life gave way to simply being alive. Simply feeling the amazing fortune of being on an isolated planet, in an isolated solar system, in an isolated galaxy that has the perfect mathematical ratios between its moon and the distance to the sun to present such a spectacle. The audience on that hill had similar reactions as you could hear them joyfully proclaiming their astonishment along the mile long ridge. Their humanity was palpable and overwhelming. For a short period, we were one, not only with each other, but with the planet and the universe.

I continued to watch until the sun exploded out of the edge like a diamond ring. The earth regained its normal appearance quickly.

There is no comparison that a total eclipse has with a partial eclipse. Yes, you may have seen 90%, but the totality is not 10% more, it is a million, billion times more. The light of the sun’s corona left my spirit opened and bare.

My mother died in 1990 having never seen a total eclipse. If you are reading this and you are alive, you had a chance that she didn’t. People told me they weren’t going because of traffic, work, school, and that they had a bad week prior. These aren’t reasons, they are excuses. After what I witnessed, I would walk the 200 mile distance sick and naked to see it again. If you didn’t see it this time around, and you get another chance, don’t let it slip by. It will stay with you forever.

One thought on “Eclipse”