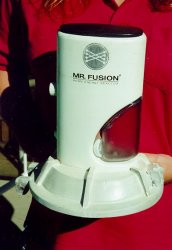 In the early twentieth century, a hotel owner named Raymond Orteig witnessed many attempts at transatlantic flight and decided there was a need for further motivation. He offered a $25,000 (approximately $500,000 in inflated dollars) reward to anyone who could complete the flight. This motivated a 25-year-old pilot named Charles Lindbergh to make the 30 hour flight from New York to Paris. In turn, this effort spurred further aviation development and jump-started commercial air transportation.

More recently, Anousheh and Amir Ansari offered a $10,000,000 prize in May of 1996 to any private entity able to achieve the suborbital boundary of space height of 100 kilometers, then relaunch the same vehicle to the same height within two weeks. This charged 26 firms towards reaching this goal, with Scaled Composites of Mojave, California finally winning the prize less than a decade later on October 4th, 2004.

A little bit of financial motivation goes a long way. Compared to what government has spent on similar projects, the Ansari Prize was a drop in the bucket. Shortly after Scaled Composites completed their feat, NASA took a cue from the Ansaris and offered “Centennial Challenges”. Geared towards space exploration, these offer everything from $50,000 to tether construction that would be crucial in a space elevator to $250,000 for extracting oxygen from simulated moon rocks.

I believe bounties and prizes are an excellent way to spur private work to solve our toughest problems. It is encouraging to see NASA offering up to $250,000 in prizes, but as they say, “Care to make it interesting?”

My advocacy of nuclear fusion as an energy source for America and the world has not been muted. Balancing our energy needs is a top platform point and nuclear fusion is a big part of that. Hot nuclear fusion is clean, safe, uses fuel that is plentiful, and is what I believe is imminently possible. I am fond of telling skeptics to walk outside and look at the firey-orb in the sky when they tell me it is not.

A new angle on fusion was presented to me on a recent campaign stop in Logan. As I was relating my interest in fusion energy generation to the Cache Democrats Vice-Chair, Vince Wickwar, he responded by telling me there was a plasmas physics professor at Utah State University who was working with fusion. I was stunned because I was under the impression that any kind of hot fusion work needed a building-sized reactor. He told me that USU had a tokamak that could fit inside a small trailer. I’d imagine at that point Vince thought my eyes were as wide as saucers.

Professor W. Farrell Edwards had a bit of spare time to meet with me about the work he is doing with fusion. He showed me pictures of the tokamak which was obtained from a group at Saskatchewan University. Although careful to downplay the possibility of success of his theories generating positive energy, it was exciting to hear Professor Edwards talk. There is belief that tokamaks could be reduced to the small enough sizes that could power vehicles, then in turn fuel a 200 horse-power car off a cup of heavy-water for fifty years. If that was possible, energy generation could truly be democratized on a global basis. Mr. Fusion indeed.

How much progress could be made towards the goal of positive energy generation from fusion if attached to its completion was a $100,000,000 prize? I bet that like transatlantic and suborbital flight, a solution could be found in less than a decade. Energy generation from fusion is not the only problem government could attach a bounty to. How about cheap, efficient solar generation? Maybe room-temperature superconductors for efficient electrical transmission? What about prizes for solving health, food, and environmental issues?

Cutting a check is one of the things the federal government has a good grip on. The beauty of prizes is no tax-payer dollars are spent for failure. Americans can and have solved problems if given a motivation for doing so and a big pile of cash does that like nothing else.

3 thoughts on “Eyes on the Prize”