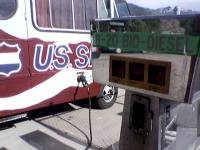 The Deseret News has a light piece on what public officials drive. Too bad I’m not in office, for I have a tale to tell.

The Blue Eagle is back on the road. I took it to Logan last Saturday for a stop at the Rotary district convention banquet. Having a local shop repair the transmission turned out to be the best choice. What would have taken a month and a few more years off my father’s life took some local pros a week. So aside from a few other minor quirks, it has been humming along the Utah freeways just fine.

As I was headed to Logan, I realized I needed to refill the diesel tanks. It was then that I remembered that the website for the Utah Biodiesel Cooperative mentioned there was a commercial biodiesel pump available in Brigham City. When the motorhome was first being considered for the campaign, I thought it would be great to power it via biodiesel, but after investigating the effort it takes to make it, I quickly abandoned that idea. It wasn’t until someone at a campaign event told me about the UBC that I realized I could purchase biodiesel from the pump in Utah.

Using my roaming Internet connection, I found the location of Cardwell Distributing in Brigham City. It wasn’t too far off the path to Logan. A fully unattended station mainly setup for agricultural needs. As I was filling, a local walked over to check the price, which was about a nickel cheaper than regular diesel. I asked him if it was always that way and he responded, “Yeah, but its still too expensive.” “There isn’t any reason it should be,” he continued.

64 gallons and $200 later, the Blue Eagle had finished gorging on the pump.

Although what is pumped is known as B20, 20% biodiesel to 80% normal diesel, the difference is remarkable. Driving a 30-year-old motorhome with the engine at your side has a bit of an odor and diesel makes it worse. The question I get asked is if it really does smell like french-fries. I don’t know where that came from, because there aren’t any potatoes involved. Insert your nose into a bottle of vegetable-oil and you’ll get a more accurate idea. Not entirely unpleasant, but a whole lot better than normal diesel. I’ve been told that biodiesel runs much cleaner too. It isn’t hard to imagine from the smell.

The icing on the cake came when there was discussion at the banquet about the Rotary district governor’s car. When he became district governor, he bought one of the new Volkswagen TDI diesel Jettas to drive around Utah. When asked about the MPG, he said it was around 45. Now, I’m neither a chemical engineer, nor do I the understand depths of the auto-industry, but when we can supplant 20% of our fossil fuel needs, today, and drive vehicles which are more efficient than unleaded-hybrids (hybrid-diesel anyone?) , why aren’t we? Although ethanol seems to hold some promise, I think biodiesel holds more. It shouldn’t have to take a treasure-hunt to find biodiesel at the pump, it should be everywhere there is diesel.

There are changes we can make today, without waiting, to reduce our need for foreign-oil drastically. America needs leaders who are willing to do so.