Yesterday, one of my Facebook friends angrily denounced Indivisible Utah as being turncoats. This was due to a recent meeting or announcement that they were going to support moderate Republicans. Want to know a secret?

I agonized over the same idea.

My belief is that Democrats will not elect a candidate to statewide office over the next twenty years. It doesn’t matter how well financed, how well organized, how well spoken, or how robust or fair their platform is, I do not believe a Democrat can cross that line in Utah. After being rejected by the Democratic party when I ran in 2012, I felt the next logical step was to try running as a Republican. After all, who can argue with an automatic 40 point boost just because you’re in God’s party? I rationalized this by looking at the great Republican presidents. Abraham Lincoln, of course, who abolished slavery against industry interests, advocated for women’s suffrage, and held the union together. Theodore Roosevelt, who busted up monopolies and trusts and spoke truth against power. Dwight Eisenhower, who initiated the largest infrastructure project in our nation’s history, the Interstate Highway system, and warned us against the military industrial complex. Even Ronald Reagan holds my admiration for striving for the complete elimination of nuclear weapons. These Republican presidents shared my ideals, why couldn’t I share their party?

When I ran in 2006, one of the first people I talked to was former Representative Bill Orton. I asked him the same question. Why run as a Democrat? Why not just give in and make it easy on yourself, and run as a Republican? His response was typical Bill, “I couldn’t get myself clean in the morning.” “I couldn’t get the stink off my body.”

In the end, I have decided not to switch parties. My mother, who was an avowed Democrat for all of my life, and did things like wear T-Shirts with the dictionary definition of “Liberal” to the ward 4th of July breakfasts, would have never forgiven me. I was reminded of her persistence when I saw the documentary Political Animals. It is about the first four open lesbian women elected to the California legislature in the early 1990’s. Throughout their tenure, they were the vanguard for LGBT equality laws in California. Although every law they fought for was not easily won, they persisted, they worked, and they endured harassment, ridicule, and threats to advance justice for all. Their efforts undoubtedly caused a ripple effect throughout the nation for equality. How would our country be different if they had given into cynicism?

Why waste my money on a candidate that will inevitably lose? I know that answer better than most. The money that was spent on my campaigns was not wasted. It changed minds. I remember one incident at a Heber City Rotary meeting. It was well after most people had filtered out of the restaurant, when a man returned back in. He told me that he was driving back to work, and one thing I said had stuck in his mind. I asserted, and I still assert, that it is not the business of government to be regulating marriage. Aside from my belief that it should only be available above the age of 18, consenting adults shouldn’t be told by the government whether they can marry or not. The man returning to the restaurant came back to thank me for that perspective. It had changed his mind. Tiny stones can make large ripples. Giving into cynicism does nothing but create bitterness.

Since reaching this conclusion, I’ve supported a number of Democrats running in Utah and elsewhere. Want to know another secret? If you ask, I give. It may not be much, but it is something. In 2006, I received a check for $7.50 from a 90-year-old woman in New Jersey who told me she was living on social-security. She said she supported Democrats all over the country because she believed in the fundamental ideals of the party. The fundamental ideals that were espoused by Franklin D. Roosevelt and John F. Kennedy. In spite of the catastrophic failure of the national Democratic party and the lack of wins locally, these ideals still ring true.

I will continue to fight for them. 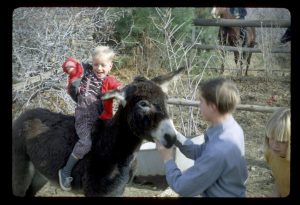 6 thoughts on “Turncoats and Tilting at Windmills”