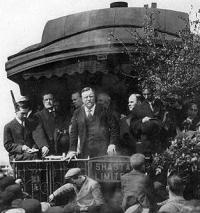 I saw Barack Obama this last weekend in Park City. He is the fourth Democratic presidential candidate that I have seen here in Utah. I’ve met Richardson, Dodd, and Edwards before him. For all, it was a repeated stump speech and only Dodd had the temerity to actually open it up to questions. I was disappointed that I baffled him with my question regarding Los Alamos Labs producing fresh weapons-grade plutonium. Aren’t senators supposed to know these things?

Seeing these candidates up close has been like peering behind the wizard’s curtain of our Presidency. Although I think Obama is nearest to the greatness that once was present in the oval office with Kennedy, Eisenhower, or either Roosevelt, I was disappointed with how his first stop in Utah was handled. The roadside rally came about through the request of local Obama campaigners. Originally, his staff had planned him to simply stop at the invite-only $500/head fundraiser and then leave with the check. In spite of being organized overnight, I estimated that nearly 1000 people showed up to see him speak.

Would Obama have raised more money at an event in a park or hall where anyone could come? Yes. Would he have still been able to to do an elite VIP reception for big donors? Yes. Would he have avoided the accusation of cynical conservatives that he’s yet another limousine-liberal cherry picking in Park City? Most definitely.

At the YearlyKos convention, the question was asked of the Democratic candidates if they would visit all 50 states in their campaign. The traditional response to this is that it wastes time and resources of the candidate, yet these two guys showed more resourcefulness than any presidential candidate ever has. I have a hard time imagining Lincoln or FDR thinking more of media buys than actually hitting the road. American’s cynicism for the presidential elections has peaked, and yes Barack, we do want “change”. We also want to “change” how our President is elected, and so far it has been the same old game.

6 thoughts on “Just Passing Through for the Check”